For the past four years, President Obama has had to answer to 300 million people. He managed to provide a service valuable enough to see him hired on for four more. Add to that the fact that he's an active father and loving husband, and one can't help but be intrigued to learn the secret to his success.

So how has he done it? What are President Obama's key ingredients to making the most out of each and every day? 99U pieced together detailed journalistic reports of the President's day to compile a list of productivity tools that have given our commander-in-chief a second term in the White House.

1. Wake up prepared. As soon as his morning begins, the President is prepared for what lies ahead of him. He stays up the night before, after his family has gone to bed, to go over notes and review information he wouldn't otherwise have a chance to. This gives him an informed outlook from the moment he opens his eyes. This can apply for the average person as well. Giving yourself even 30 minutes in the evening to lay out clothes, jot down a to-do list or make lunch for the following day can help kick start your day.

2. Do not make unnecessary decisions. In a typical day, the President of the United States makes numerous decisions, which will impact the lives of millions. To focus on what's important, he leaves daily life decisions to his trusted staff. You won't find the President picking out his own clothes or choosing what to eat. Of course, the rest of us don't have this luxury or this responsibility, for that matter, but that doesn't mean it's not useful. It can be something as simple as letting your child pick out their snack or having a spouse or friend decide on dinner.

3. Don't listen to the negative. You will never find President Obama watching the news. You will find him watching ESPN instead. He makes it a special point to drown out his critics, and even his fans. This keeps his head in reality and separates him from the "character" that's created in the media. We would all be wise to learn from this. We all have our critics and fans at any level. Never focus on those who want to tare you down. Focus instead on what you know to be true about yourself and the way you live your life.

4. Make time to move. President Obama knows that if he's given daily time to exercise, everything else in his day will be more efficient and focused. If the President can carve out time to exercise, then we all can. Beginning the day with a workout can help you be better prepared to handle whatever stress comes your way.

5. Make time for yourself. Dinner time is especially important to President Obama. He has specially designated time in his schedule every evening to sit down and have dinner with his two daughters and the First Lady. This helps him stay connected to his life as a father and lets his children know they are important to him. Now this is one area that any of us can relate to without modification. Taking the time to sit down as a family can bring everyone together. Whether you have a large family with lots of children, whether you're a couple, a single parent or even a single person who wants to spend time connecting with friends, allotting time for a proper meal is important. We eat on the run far too often and forget that food is a thread that connects us all.


Outsourcing and Productivity: When Should I Delegate? 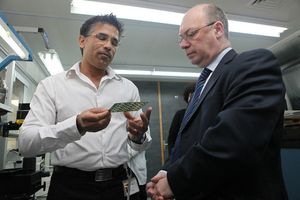