Get to know more about Billy, as he talks about his love for performing and his sneaker collection.

1. When you were a child, what did you tell people you wanted to be when you grew up? Did you follow that dream, or did life take you in a different direction?

When I was growing up I was sure that I wanted to be a performer. I was constantly building sets and putting on shows pretty much anywhere that I could think of. I remember writing a letter to Rosie O'Donnell asking her to get me on broadway after seeing her in Grease! Although as a child, I may have told you that I wanted to be a Broadway performer, my need for the spotlight still drove me to where I am today. I think that 10-year-old me would be pretty impressed with some of the gigs I've landed and 29-year-old me is just like, "Yeah, no big deal."

2. What do you think your life would be like if cellphones were never invented?

I would probably be in the closet and a virgin. I guess the real scary question is, what would my life be like if there was no internet?! After our digital detox experiments conducted last month, it is evident that life without a cell phone is a struggle. I rely on my device so much nowadays that I would be an unorganized mess who is impossible to get in touch with. Pretty much, thank God for cell phones.

3. What is an item or collection of items you own in excess? Why do you have so much of it?

Although I have kind of toned it down over the years, I still have a shit ton of sneakers. I'm the type of person who tries on two pairs, can't decide which to buy and walks out of the store with both. I'm a firm believer that the kicks can totally make or break an ensemble, and looking at my feet right now makes me want a new pair.

4. If you could create a rule for Facebook and other social media platforms, what would you ban from existence and why?

Oh man, I could probably write an entire list of rules that I would put into effect, but there is one kind of post that I for sure always hide -- BLOOD. I've got a weak stomach when it comes to open flesh. I don't care if it's a paper cut or you lost your fucking arm, please don't post your blood and guts on social media. It's nasty.

5. What is your favorite item to snack on while you are working, and are you less productive when it's not around to munch on?

I'm quite a snacker. Days have gone by where I did not even eat a meal and just snacked they entire day through. When planning to camp in front of my computer for a productivity-sesh I love having Pepperidge Farm Goldfish crackers within reach. There's something about those little golden smiley fishes that my tummy just LOVES and my pup, Gunner LOVES when I drop one. As far as being less productive, I wouldn't necessarily say that I was less productive without them but it saves me a trip down to the kitchen to have them handy! 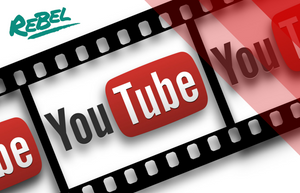 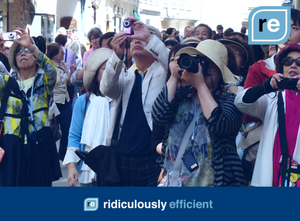