The Truth About Positive Thinking

Most of us believe in the power of positive thinking -- if we are optimistic about an outcome, we will achieve the desired end result. It turns out this might just be a myth. Research conducted by Gabriele Oettingen, a professor of psychology and the author of Rethinking Positive Thinking: Inside the New Science of Motivation, found that those who think positively are actually less likely to be successful in their chosen endeavour.

Oettingen first conducted a study more than 20 years ago in which she enrolled women in weight loss programs that had several open-ended outcomes. Each participant was asked to imagine how they would do in each of the scenarios, before rating how positive or negative their thoughts were. A year later, Oettingen checked in with the women to see how they were doing with their weight loss, and she found that those who had positive images of the scenarios had lost fewer pounds.

After conducting several studies over the years, Oettingen said the outcome was always the same.

"Fantasizing about happy outcomes — about smoothly attaining your wishes — didn’t help. Indeed, it hindered people from realizing their dreams," she wrote in The New York Times.

She adds that while thinking about the future tends to calm people down by reducing systolic blood pressure, it also drains the energy you need to actually take action toward that goal. This theory was proven in a 2011 study in which students who had positive thoughts about the week ahead felt less energized than the controlled group.

"Positive thinking fools our minds into perceiving that we’ve already attained our goal, slackening our readiness to pursue it," Oettingen writes.

She suggests people try a more realistic approach without dwelling on obstacles. "Think of a wish. For a few minutes, imagine the wish coming true, letting your mind wander and drift where it will. Then shift gears. Spend a few more minutes imagining the obstacles that stand in the way of realizing your wish."

Oettingen and her colleagues refer to this method as "mental contrasting." In another study, participants who practiced mental contrasting had more energy and ultimately achieved better results in comparison to those who either concentrated on positive outcomes or dwelled on obstacles.

"When participants have performed mental contrasting with wishes that are not reasonable or attainable, they have disengaged more from these wishes," Oettingen said. "Mental contrasting spurs us on when it makes sense to pursue a wish, and lets us abandon wishes more readily when it doesn’t, so that we can go after other, more reasonable ambitions."

Just because positive thinking is the more desired approach, doesn't mean it's the one that will get the best results. Try practicing mental contrasting, especially when thinking of long-term goals and even New Year's resolutions. A few weeks later, evaluate your progress. How have you fared?


Your Windowless Office is Making You Lose Sleep


Productivity Affirmation #8: I Am a Competitor 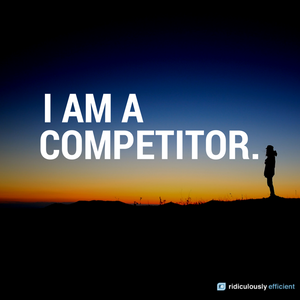