FOMO Is Real, And It's Creating Super Anxious Teens

FOMO (Fear Of Missing Out) is a term that has been used a lot lately, as a way to describe how millennials feel when they see others doing seemingly spectacular and fun things on social media. Not getting to go to that music festival, not attending that restaurant opening and not going on that vacation with friends all feels worse when it's practically shoved in your face as a constant reminder. According to recent research from the University of Glasgow, FOMO is a very real thing, and it is having a major impact on teenagers.

According to the findings, the "pressure to be available 24/7 and the need to respond "to posts or texts immediately" is causing serious anxiety. In a survey of 467 students between the ages of 11 and 17, the researchers found that those who were very active and emotionally invested in their digital lives didn't sleep as well, had lower self-esteem and more bouts of anxiety and depression than those who spent less time on social media. Additionally, teens who spent more time on websites like Twitter, Facebook, YouTube, Tumblr, and Instagram in the evenings were even more susceptible to FOMO.

“While overall social media use impacts on sleep quality, those who log on at night appear to be particularly affected,” said Dr. Heather Cleland Woods, one of the head researchers. “This may be mostly true of individuals who are highly emotionally invested. This means we have to think about how our kids use social media, in relation to time for switching off.”

Woods and her team is suggesting to implement a "digital sunset," which would force all your devices, like tablets and smartphones, to switch off at a certain time every evening until the next morning. While this particular research is targeting teens, everyone can benefit from spending some time unplugging in the evenings. The constant connectivity of our society makes it a lot more difficult to just sit back, unwind and escape it all for a few hours.


Would You Work Where You Play? 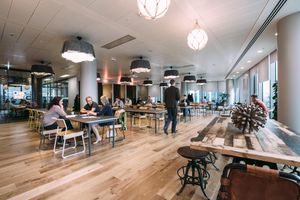