Going Into Monk Mode Will Decrease Stress for Intense Productivity

Author Greg McKeown found himself spending his nights anxious and awake while writing his first solo book. However, as someone who was writing a book titled Essentialism: The Disciplined Pursuit of Less, he knew he had to find a way to write his book without "being stressed out for a year." What he needed was more time and space to focus, which would help him decrease his stress while increasing his productivity. So, he entered Monk Mode.

"[Monk mode] means shutting out the world for a time," McKeown writes on LinkedIn. "It is a relatively extreme approach to take, but [my wife and I] decided I would write from 5 a.m. to 1 p.m. every day. I did that for five days a week for about 9 months. I worked from a small office--tiny really--but in it I found space. And in that space I found creative freedom."

McKeown adds that the long-form concentration, the type that brings you to the solution of a complex problem, can only come after setting boundaries with yourself and others. So, he set up an autoresponder for anyone trying to get hold of him via email. It basically read that he is working on a book and doesn't have the time to respond to emails the way he would like. This doesn't mean he spent the better part of a year ignoring all emails, but it let everyone know that he was in author-mode and may or may not reply to your email at this time.

By entering Monk Mode, McKoewn was able to tackle the huge task of authoring a book without losing anymore nights of sleep. 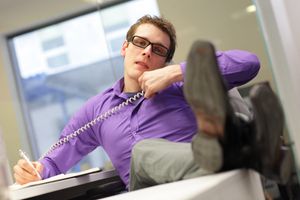 
Don't Worry, You're Not the Only One Ignoring Your Boss's Phone Calls


Why You Need to Kick Your Employees Out of the Office