Can Women Have it All? We Analyze PepsiCo CEO's Honest Interview

Indra Nooyi is the CEO of PepsiCo, a job that leaves little time for family and fun. Indra recently appeared at the Aspen Ideas Festival, where she was interviewed by David Bradley, the owner of The Atlantic. The interview was a candid one, in which Indra revealed the struggles of running a large company while trying to balance a family and the cultural expectations of being an Indian woman.

Marissa (CEO/Founder of Ridiculously Efficient Inc.) and I were pretty shocked by some of the things Indra had to say, so we shared our reactions to a few of Indra's quotes below.

This is about 14 years ago. I was working in the office. I work very late, and we were in the middle of the Quaker Oats acquisition. And I got a call about 9:30 in the night from the existing chairman and CEO at that time. He said, Indra, we're going to announce you as president and put you on the board of directors ... I was overwhelmed, because look at my background and where I came from — to be president of an iconic American company and to be on the board of directors, I thought something special had happened to me.

So rather than stay and work until midnight which I normally would've done because I had so much work to do, I decided to go home and share the good news with my family. I got home about 10, got into the garage, and my mother was waiting at the top of the stairs. And I said, "Mom, I've got great news for you." She said, "let the news wait. Can you go out and get some milk?"

Marissa: Talk about a letdown. I can definitely identify with the work vs. home power struggle. I like instituting a 10- to 30-minute “buffer” time for working families: nag-free time to let whoever’s just come home from work mentally “unpack” from the day and realign with the energy of the family at home.

Rosemina: That’s a great idea. It takes time to adjust your brain from work life to home life, and giving yourself that buffer will definitely make the transition easier. It’s also about setting expectations. In this case, Indra has set an expectation with her coworkers that she will work until odd hours of the night. At home, she’s set an expectation that she is available for chores before she even settles in. Saying ‘no’ isn’t always easy, but it’s necessary in resetting these kinds of expectations.

I looked in the garage and it looked like my husband was home. I said, "what time did he get home?" She said "8 o'clock." I said, "Why didn't you ask him to buy the milk?" "He's tired." Okay. We have a couple of help at home, "why didn't you ask them to get the milk?" She said, "I forgot." She said just get the milk. We need it for the morning. So like a dutiful daughter, I went out and got the milk and came back.

I banged it on the counter and I said, "I had great news for you. I've just been told that I'm going to be president on the Board of Directors. And all that you want me to do is go out and get the milk, what kind of a mom are you?"

Rosemina: This is perhaps the part of the entire interview that bothers me the most. I’m lucky enough to be an Indian-Canadian who has a family that is completely supportive of the idea of me pursuing a career before finding a husband and having kids. Unfortunately, it doesn’t seem as though Indra is as lucky. We both come from a culture in which the husband/father is of the utmost importance, while the mother/wife takes a back seat.

She got home late, wanted to celebrate a new promotion, but instead played, as she puts it, the “dutiful daughter” role and ran an errand at her mother’s request. When she arrived home again, she was berated for expecting her mother to show some semblance of support or happiness for the promotion.

Indra’s cultural responsibilities are getting in the way of having a work-life balance, and of being able to celebrate an achievement with her family. And, based on the above quote, her family doesn’t seem that supportive of her career. This makes me sad for her and the other women who aren’t able to celebrate their achievements simply because they are women. I bet if her husband came home with the same news, the reaction would have been completely different.

Marissa: I share your sadness, Ro. This is a really tricky cultural conflict that I haven’t experienced to the extent that you and Indra have. I was raised as an overchiever; my parents pointed out how ambitious, successful women are treated in some social and cultural circles, but growing up, I never really got the sense that I’d have to experience that.

Fast forward to 2013, and I saw a really nasty side of my first-generation extended family -- basically, a cousin tried to say that my mom lost her culture when, at 18, she moved to L.A., pursued higher education and built a lucrative, stable career. It was a stinging reminder of this catch-22: many cultures’ traditions don’t historically empower women, but today’s work environment lets women ascend to the top ranks of every facet of business. To express one aspect of life fully means giving up attention to the other.

I don't think women can have it all. I just don't think so. We pretend we have it all. We pretend we can have it all. My husband and I have been married for 34 years. And we have two daughters. And every day you have to make a decision about whether you are going to be a wife or a mother, in fact many times during the day you have to make those decisions. And you have to co-opt a lot of people to help you. We co-opted our families to help us. We plan our lives meticulously so we can be decent parents. But if you ask our daughters, I'm not sure they will say that I've been a good mom. I'm not sure. And I try all kinds of coping mechanisms.

Marissa: Wow. This is so sad. No one can doubt that Indra’s trying to make it all work, and that her heart is in the right place.

Rosemina: No, we can’t all have it all, but I don't think anyone can. These problems arise in the pursuit of having it all. It’s great that Indra and her husband have help from their respective families, who can be there for the kids when the parents can’t; this is so important. I agree that as a parent there are many roles to play throughout the day, and it can’t always be a seamless transition. But, I’m sure her daughters appreciate that their mom is a successful CEO; she’s someone they can look up to, even if they don’t have the perfect relationship.

You know, you have to cope, because you die with guilt. You just die with guilt. My observation, David, is that the biological clock and the career clock are in total conflict with each other. Total, complete conflict. When you have to have kids you have to build your career. Just as you're rising to middle management your kids need you because they're teenagers, they need you for the teenage years.

Marissa: I’m hopeful that the rise of entrepreneurship around the world -- as well as new attitudes about work-life alignment -- alleviate some of this guilt. No doubt Indra’s not the only working parent just gutted about having to prioritize work over family. Honestly, I think this is one of the big reasons I’ve put off having kids… Before I bring another life into this world, I want my business and life to be in a place where I can be fully immersed in my kid’s upbringing without sacrificing.

Rosemina: I totally agree with Indra on this, the biological clock and career clock are in total and complete conflict with each other. The most significant thing I will ever do in my life will be becoming a mother. As much as I wish now as a good time for that, I know this is the part of my life when I have to put my career first. Once I’ve achieved at least a few of my goals, I can think about starting a family. Conflicting with this is my rising baby fever that gets worse every single time I even look at a picture of an adorable bundle of joy.

When I'm in PepsiCo I travel a lot, and when my kids were tiny, especially my second one, we had strict rules on playing Nintendo. She'd call the office, and she didn't care if I was in China, Japan, India, wherever. She'd call the office, the receptionist would pick up the phone, "Can I speak to my mommy?" Everybody knows if somebody says, 'Can I speak to mommy?' It's my daughter. So she'd say, "Yes, Tyra, what can I do for you?"

"I want to play Nintendo."

So she has a set of questions. "Have you finished your homework?" Etc. I say this because that's what it takes. She goes through the questions and she says, "Okay, you can play Nintendo half an hour." Then she leaves me a message. "Tyra called at 5. This is the sequence of questions I went through. I've given her permission." So it's seamless parenting.

But if you don't do that, I'm serious, if you don't develop mechanisms with your secretaries, with the extended office, with everybody around you, it cannot work. You know, stay at home mothering was a full time job. Being a CEO for a company is three full time jobs rolled into one. How can you do justice to all?

Indra could take a cue from Steve Ballmer, former Microsoft CEO, who used a spreadsheet to help him budget his time. This would help him allocate his free time and ensure he could, for example, attend his kids’ sporting events. With everything spread out in front of you this way, it’s easy to see how you are spending your time, where you can improve, and how you can make changes for a better work-life balance.

Marissa: I’m with you here, Ro. It’s like the old saying by Jim Rohn -- “You can’t hire someone else to do your push-ups for you.” You have to do your own push-ups… and parenting. When your own kid can’t get past the gatekeepers, something’s amiss.

Rosemina: I’m sure this was meant as a joke, but I’d like to point out that Indra’s kids are fourth on her list of priorities, according to her husband Raj.

Marissa: There’s an interesting parallel… the husband feels he’s at the bottom of his wife’s priority list, but according to the mother, Indra’s husband should be higher on Indra’s priority list than Indra herself. I don’t doubt that Raj and Indra are having a tough time connecting. From this brief interview, I didn’t get a sense that they have any routines or habits to stay on the same emotional wavelength.

What do you think of Indra's revelations? Can women have it all? Tell us in the comments below, or on Twitter @efficient. And check out this article for a post-pandemic take on work-life balance culture.

h/t to Business Insider for the transcription 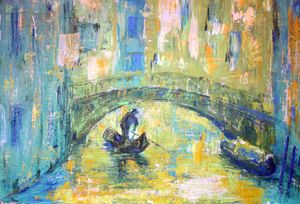 
Why Companies Should Have Fine Art in the Workplace


Productivity During the 2014 World Cup [Infographic]