Each member of Team Ridiculously Efficient was tasked with spending one 24-hour period in September without using any screens. That meant no smartphones, no laptops, computers or tablets, and no TVs. This is how we fared.

Last month, we were urged to complete a digital detox for 24 consecutive hours. I was beyond excited. It was the day I had been looking forward to for so long because I knew that without any access to a phone or computer, I would be 100% offline and therefore have my first real day off in a long time.

Well, due to some traveling, this 24-hour detox turned into a 48-hour detox. My family owns a set of cabins up in the mountains in beautiful Pecos, NM. The campsite is breathtaking. There is so much to do, from hiking, to fishing, to rock climbing... you name it. They have a full kitchen, dance hall, and all of the equipment you could need for your outdoor activities. However, there is one thing missing: cell reception. No cell reception = no texting, no Wifi, no service.

The first night when our group got up to the camp grounds, everyone still had their phones in their hands at all times, even though they knew there was no cell reception. Their phones could only be used as a clock and a flashlight. Yet, people continued to check their phone religiously, myself included. After about 2 hours of checking my phone and realizing it was nothing more than a paper weight, I put my phone in my backpack and never checked it again. Once I did that, it felt like a large weight was lifted, even though my phone only weighs 6 ounces.

Once everyone finally realized that there was no cell reception, and there was not going to be, they finally put their phones away as well. But everyone was still kind of antsy. One member of our group kept getting up and fidgeting with his hands, non-stop. It was crazy how just that one small device can have such a huge impact.

By the end of the night, everyone had finally settled in. People began having real, honest, focused conversations at dinner, which didn’t happen on the drive up because everyone was on their phones. The next day, every single person woke up calm, relaxed, and bright eyed. We doubled our productivity from the day before and even finished early. Instead of going inside and watching TV or texting our friends or family (like we would when we are at home with internet access or cell phone service), everyone picked up a rod and reel and tried to fish. Later that night we had a great dinner as a group, then everyone stayed up and told stories around a campfire.

That night at dinner, amidst all of the great conversation that was happening, I paused, sat back in my chair, and looked at each individual at the table. Both of my parents were sitting there, as well as a retired Lieutenant Colonel Green Beret, a former olympic athlete, a former professional NFL player turned playwright, and our fishing guide for the day. We had such a diverse group of people who are all extremely successful in their own right. As I looked around, I didn’t see the stress or worry of leaving everything behind that I did the day before. Each of these people have a career that they are at the peak of, yet they took the time to put all of that aside and discuss the true meaning of leadership and what we plan to do to build true leaders for this country.

Later that night around the campfire, we got to hear some of the war stories that each of these people had in their own industry. It really gave me a better understanding of each person as an individual and how their past is shaping their career for the better. The creativity and focus that went into that day was unparalleled, and I attribute that to no cell service. Everyone was dialed-in and intentional about everything they did.

The next morning, we drove back to ABQ. Everyone was spry and talking as we started driving back down the mountain. About 20 minutes into the drive, the first ring went off. Sure enough, one by one everyone started getting service. By the time we got to the airport, not one person was talking to anyone else in the car; they were all on their phones.

It sounds crazy, but those 48 hours without a phone was like a dream come true. I got to know people at a level that I never thought that I would and I still cherish that time. So, I challenge each of you to give it a try at least for 24 hours and see the difference it can make. 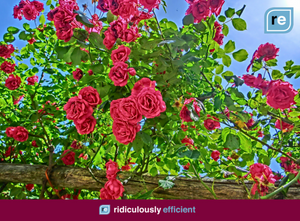