Today's Ridiculously Efficient Fitness post is an interview with Diana "Deej" Weishar. Deej has been an integral part of the latest phase of my fitness journey, and as I learned, she has a pretty inspiring journey of her own. She has lost over 100 pounds and kept it off by enabling healthy behavior and making slow yet steady lifestyle changes.

Losing 100 pounds doesn't happen overnight, and neither does becoming Ridiculously Efficient. I sat down with Deej yesterday to talk about how she found the time and motivation to change her life, and how other busy professionals can similarly make large-scale changes.

I've divided the transcript of our talk into two parts. Today, we'll tackle the emotional evolution Deej underwent while losing weight; tomorrow, we'll cover some of the practical ways she prioritized exercise and kept herself motivated. To catch up with Deej's current pursuits, check out her profile for the Under Armour What's Beautiful competition.

You've lost 100 pounds, transforming from a couch potato to an elite athlete. Please take us through your fitness journey.

DW: Essentially, I learned that dieting works for people who need to lose 10 pounds. My major issue was that I needed to make massive lifestyle changes, so after trying several different diets and tricks that others shared with me, I learned that I needed to change my life. It really came together for me down here in San Diego. The weather is inviting and conducive to healthy living.

That was my segue into being ready to join the gym: Those runs became my transportation to and from the gym. In the beginning, I would run to the gym and then run home; I wasn't ready to stay at the gym and work out. Eventually, I got a gym membership, continuing to add to these changes slowly.

Throughout, I viewed these as lifestyle changes [instead of temporary ones], things I would never stop doing.

Did you experience any setbacks in your 100-pound weight loss? How did you solve them and move forward?

I realized that I had to stop quitting.

DW: I tried several diets. I lost lots of weight on them, but then the diet ended and I'd gain it all back plus more. That happened several times.

What advice would you give to working professionals who want to make a lifestyle change but have been unsuccessful thus far?

DW: Make small goals -- something that you know you can commit to and do no matter what. Exercise early in the morning. That way, you feel better, and it's not gonna get taken from you. People love to push exercise off to the side for you. I remember feeling ridiculous when friends would ask me after class one day, "Hey, let's go to the mall," and my response was, "I can't, I have to go work out."

There was definitely a period in my life when I had to be selfish. I had to start making decisions that were good for me and quit saying yes to people so often.

Schedule your workout and be selfish about it -- that has to be your No. 1 priority, because in the end, who's left? It's yourself, you're answering to yourself. Are you happy with your weight? Are you happy with the decisions that you've made?

It felt selfish at first, it felt wrong. But now I relish in the fact that I'm my own priority because I'm happy, I'm healthy, I'm an inspiration to others, and that's all because I started putting myself first.

How do you keep yourself accountable, fitness-wise?

DW: Little incentives. One way is to buy myself something special. Not food. Something like a nice shirt, a pair of pants, something for my hair -- things that I might even get anyway. Even that helped fuel a healthy lifestyle because my new incentive was buying a nice pair of workout pants.

Now I do fitness events that I register for and put on my calendar so that I'm constantly training for something. That's a huge one, because if race day comes and I'm not ready, I'll regret it. And I paid the money, so I'm running the race whether I'm ready or not.

I just quit being embarrassed by myself.

I generally weigh in every day, but the weigh-in I pay the most attention to is the one at the end of the week, because it's nice to smile about something. I use an app called Target Weight [iTunes link] to track my weight.

I was really hesitant to start logging my weight at first, but you have to start somewhere. I just quit being embarrassed by myself. I'm so glad that I did, because the graph that the app sketches out for you is impressive to look at [after awhile]. It's exciting to see that downward incline and to track my progression in general, and throughout different times of the year and the month, just getting to know my body better.

Note: This is the latest installment of an ongoing series. Peruse the ever-growing archive here, and check back tomorrow for Part 2 of our interview. Have a question for Deej? Ask it in the comments section below, and I'll make sure she sees it.


TED Talk Tuesday: Susan Cain on the Power of Introverts 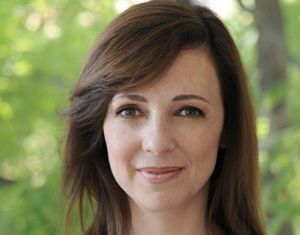