Today's Ridiculously Efficient Fitness post is Part 2 of my interview with Diana "Deej" Weishar. (Check out Part 1 here.) In this half of our chat, we talked about the practical ways she fit exercise into her busy schedule and stayed motivated en route to losing over 100 pounds. To catch up with Deej's current pursuits, check out her profile for the Under Armour What's Beautiful competition.

Exercise is a part of your daily routine now, but how did you initially find the time to work out?

DW: Initially, I found the time to work out just by not thinking about it. People always come up with excuses. If you think about anything too long, you'll find a reason not to do it.

If you hold that commitment to yourself, you will find the time.

It was not easy [at first]. Some nights, I was walking at 11 o'clock at night. I was working way more than full-time and had other responsibilities, but I had to do it -- I had to stick to my guns. Eventually, if you're as committed to yourself as you should be, it will become a necessity for you to carve out that time, because you're going to be exhausted going on walks at 11 p.m. or waking up at 5 a.m. to get that walk in before the day takes it away from you.

Out of necessity, if you hold that commitment to yourself, you will find the time, and it will happen for you.

What changes have you made to your lifestyle besides exercise?

DW: My portions have massively changed. I used to eat a ton, I can't even deny it. It explained why I was the size that I was. Exercise is something that I took to easier than the diet change, and for some people it's the opposite.

I also altered my food choices, [especially] eating out. If I was frank with myself and knew that I dined out, say, six times a week, I'd cut it out once. Nobody's going to go from eating out 10 times a week to not eating out at all. They might for a week, but not forever. I cut back on dining out a little at a time, and then it eventually went down to not even thinking about fast food.

I walk more now. Anything that I can walk to, I do: turning in my recycling, walking to the grocery store.

I also work out as soon as I possibly can in the day before somebody takes that away from me, and before the day gets away from me. Because it happens -- life is busy.

What are some of your favorite ways to get active when you are in a time crunch?

DW: I'm a big fan of consolidating my activities. If I know my dog needs to be exercised, instead of sitting on a park bench and throwing a ball, I'll exercise with my dog. It's something I don't even consider exercise -- I'm doing it for my dog -- but I'm burning calories while I'm rollerblading with him.

I'm not a mom yet, but working as a nanny, day in and day out, there are several opportunities where I can do lunges or squats or situps -- for example, just playing on the floor with [the child] while she's choosing to read a book. Even if I'm singing a song with her, I'll lay on the floor with her and do some crunches. She thinks it's funny, she thinks it's silly -- she lays down and wiggles her legs in the air.

Another thing: If I'm on the phone with someone, instead of sitting on the couch, I'll plug in my headset and go on a walk. If I want a more intense walk, I'll throw on a weighted vest or find a hill.

I also really don't sit a whole lot. I'm sitting in this interview, which is nice, but almost everything I do, I'm moving around and standing. When you add up all the energy you use moving around, it really adds up, especially compared to the person who sat there the whole day.

How do you stay motivated to continue to hit the gym and eat wisely?

DW: I like to look at old weigh-ins that I used to take -- even the old ones scribbled on notebook paper. It's wild to believe that that was me, but I knew that there would be a point where I would look back and go, "I can't believe that my first digit was a 2. I can't believe my second digit after a 2 was a 5."

It's important to be inspired by yourself.

I've also received lots of letters and emails and phone calls and voice mails from people admiring my progress and my success. I read over messages sent to me to stay inspired. I look at victorious pictures of me, pictures that I'm proud of.

I think it's important to be inspired by yourself. It evokes a power within myself and propels me so much further than seeing a photo of somebody I don't even know whose body I admire, or even somebody I do know, because it's my progression. It's so empowering.

I put pictures of myself that I love on the refrigerator. I've heard people say that putting pictures of overweight people, or people you don't want to be, helps, but that's untrue for me. I've found that discouraging, and it makes me feel justified and even complacent. Whereas if it was a photo of me, it makes me realize that I still have further to go and to keep fighting this battle.

My husband is away on a deployment, and that's another thing I think about to stay motivated. Besides the things that he does for his job, he's also staying dedicated to the gym so that we can continue this lifestyle together and run our events together when he gets back.

Another huge motivator is thinking about my future family and children, and just the task of becoming pregnant. I never wanted my weight to become a cause for infertility, which it can be for women. I told myself a long time ago, "I'll be damned if the reason I can't get pregnant [one day] is because I love cheeseburgers."

I keep a running list of inspiration. Some of the things that I had on there in the beginning were my wedding, motherhood, even silly things like fitting into a pair of name-brand jeans. And my family. I always wanted my family to be proud of my physical appearance -- that was something I had trouble picturing. I always wanted to be a good example to my nieces and nephews. I wanted them to know that I endorsed healthy living in every way, [to] see that I'd fought a demon that had plagued me so heavily.

Anything you think about can be motivation -- "I can't wait to be thin and do that," "I can't wait to be fit and do that" -- even if it's something like fitting into a roller coaster better. I couldn't wait for the day that I was a fit, healthy nanny. I mean, I would be proud to employ a nanny who worked hard to live healthy and make good food choices and exercise.

I see the girl inside that wanted it so bad, and it's almost like I want to prove to that girl again that I'm still in it.

Some of [the items on my inspiration list] are really silly -- some of them I'd be embarrassed for people to read -- but those are what kept me fighting, what made it my journey, and got me to succeed.

I also made a couple of makeup tutorials for my sister on YouTube. Occasionally, I look back at those old videos of me at 200-plus pounds. I see the girl inside that wanted it so bad, and it's almost like I want to prove to that girl again that I'm still in it.

Watching those videos, I'm reminded of what that felt like. I see the sorrow in my eyes. Things aren't easy when you're 100 pounds overweight. To see the way my mouth had to move to enunciate properly. To see the way my fingers maneuvered on the makeup brushes. It's a little painful to watch that, to be completely honest, but it's exciting because I turn the video off, and that girl's gone, and I stand in front of a mirror, and this girl is here, and she's real. I did it, and I'm still going.

It's gonna be a lifetime journey, which I'm happy about. I learned at the beginning that this wasn't going to be a quick fix. This is the way it needs to be. I'm happy to share this with other people. There are good days and bad days, but through it all, I've proved something to myself by moving forward one step at a time. I stopped thinking about doing these things and just started doing -- even robotically at some times, but I just kept going.

A lot of it, I was almost numb for, but you have to be: If you think about going to the gym, it's over. Once you think about it, you'll come up with a reason not to. You have to let it snowball and keep packing your gym bag at night. Don't stop, don't ever, ever, ever stop. You're gonna find success and you're gonna surprise yourself. Because I know that I have.

Note: This is the latest installment of an ongoing series. Peruse the ever-growing archive here. Have a question for Deej? Ask it in the comments section below, and I'll make sure she sees it. 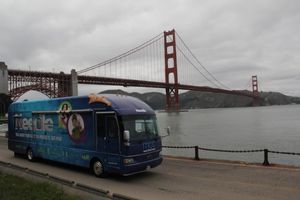